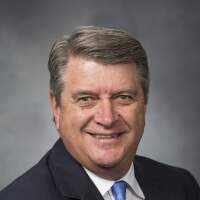 Brent L. Top is a professor of Church history and doctrine and former dean of Religious Education (2013-2018) and chair of the Department of Church History (2009-2013). He currently holds the Richard L. Evans Chair for Religious Understanding. He was born and raised in Idaho Falls, Idaho. He received all of his degrees from Brigham Young University—a BA in history, a master's degree in instructional media and Ancient Scripture, and a PhD in instructional science and technology, graduating with honors. Before joining the BYU Religious Education faculty in 1987, he worked for the Church Educational System as a released-time seminary teacher, an institute teacher, and an administrator. Dr. Top served as associate dean of Religious Education from 1997 to 2002. He held the endowed Professorship in Moral Education from 2002 to 2004. His love for teaching and effectiveness in the classroom has been recognized with the Robert J. Matthews Award for Teaching Excellence in Religious Education and the BYU Student Association's Teacher of the Year Award. In addition to his teaching and involvement in inter-religious endeavors, he is widely published. He is the author or co-author of twenty gospel scholarship and family relationships books directed primarily to the Latter-day Saint audience. Some of his books have been translated into German and Spanish. He is a co-author and co-editor of two academic books published with a university press. He has published articles for The Ensign, as well as scores of peer-reviewed articles and chapters in books. He hosted over 60 episodes of "Past Impressions" a series of interviews with scholars and experts of LDS Church History on the Mormon Channel. He is married to the former Wendy Cope from Idaho Falls and they live in Pleasant Grove, Utah.

Courses Taught: Doctrines of the Gospel, Teachings of the Living Prophets, LDS Marriage and Family, Doctrine and Covenants, Old Testament, New Testament, The Writings of Isaiah, and The Eternal Family.