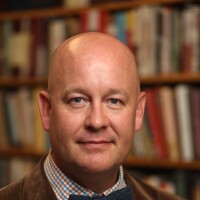 Dr. Michael Hubbard MacKay is an associate professor of religion in the Department of Church History and Doctrine. He is a former historian/writer for the Joseph Smith Papers Project. He teaches World Religions, History of Joseph Smith, Doctrine and Covenants, and Foundations of the Restoration.

He is the author of several books focusing on antebellum American religion, Joseph Smith, and the production of LDS scripture. He is currently working within ritual studies in the midst of publishing an edited volume re-examining the work of Victor Turner and co-authoring a book about the development LDS ritual and scripture.

This book is about how Joseph Smith established religious authority and a long-lasting, complex priesthood structure. The thesis of this book enlivens and builds upon three scholars’ major ideas about religious authority and Mormonism in antebellum America. In an effort to move the conversation toward politics and its relationship to religion, Porterfield argued that populism constrained that relationship. Though it is true that Mormonism grew, as Hatch shows, from the populist appeal of a lay priesthood and communal living in early Mormonism, Flake demonstrates that the Mormon priesthood was hierarchical. Left just outside the focus of the work of Hatch, Porterfield, and Flake is the role of Joseph Smith defining Mormon authority—a role that has not been fully examined within this context.

Smith’s authority grew in opposition to both civic and political authority being garnered by evangelicals and as a countertrend to the populist religious movements of the Second Great Awakening. In fact, Smith’s prophetic voice and scripture formed a hierarchical priesthood structure that eventually empowered every male member of his church to become a prophet, priest, and king, while they answered to each leader above them within the same structure. Thus this book argues that Smith’s prophetic voice became the arbiter of authority. It had the ultimate power to create and guide, while it was used to form a strong lay priesthood order in a stable hierarchical democracy devoid of the kind of political authority that evangelicals fostered.


The first volume to examine all of Joseph Smith’s translation projects. Joseph Smith, the founding prophet of the Church of Jesus Christ of Latter-day Saints and of the broader Latter-day Saint movement, produced several volumes of scripture between 1829, when he translated the Book of Mormon, and 1844, when he was murdered. The Book of Mormon, published in 1830, is well known. Less read and studied are the subsequent texts that Smith translated after the Book of Mormon, texts that he presented as the writings of ancient Old World and New World prophets. These works were published and received by early Latter-day Saints as prophetic scripture that included important revelations and commandments from God.

This collaborative volume is the first to study Joseph Smith’s translation projects in their entirety. In this carefully curated collection, experts contribute cutting-edge research and incisive analysis. The chapters explore Smith’s translation projects in focused detail and in broad contexts, as well as in comparison and conversation with one another. Authors approach Smith’s sacred texts historically, textually, linguistically, and literarily to offer a multidisciplinary view. Scrupulous examination of the production and content of Smith’s translations opens new avenues for understanding the foundations of Mormonism, provides insight on aspects of early American religious culture, and helps conceptualize the production and transmission of sacred texts.

The Rise of the Latter-Day Saints: Newel Knight's History and Journal


Newel Knight (1800–1847) was one of the very earliest Latter-day Saint converts and maintained a lifelong friendship and close association with Joseph Smith Jr. The journals of Newel Knight are part of a handful of essential manuscript sources that every historian of The Church of Jesus Christ of Latter-day Saints relies on to understand its early history. He was one of a few early converts to provide an eyewitness account of the founding events in Church history, including the rise and fall of the Church in Missouri, miraculous healings, legal battles, the construction and dedication of the Kirtland Temple, the first marriage performed by Joseph Smith Jr., the martyrdom, and the cold, difficult exodus from Illinois to Winter Quarters. Knight’s history has always been a difficult source to use because it was never published in one volume until now. This book brings together his various accounts into one place to tell the story of the rise of the Latter-day Saints.

Business and Religion: The Intersection of Faith and Finance

Historians have increasingly examined how economics and business have influenced religion and religious practices, and these examinations have provided better understandings of race, gender, and ethnicity within American religion. As one scholar has noted, looking at the intersection of economics and religion “allows historians in a given place and time to rethink what is going on in a broad sweep of the American religious experience.” The BYU Church History Symposium highlighted that the field of economics and finance have much to offer to Latter-day Saint history.

"MacKay and Frederick not only provide the single best historical overview of the function and role of seer stones in early Mormon history, but also offer a provocative (if not necessarily wholly convincing) reading of the significance of seer stones to Mormon theology." Journal of Book of Mormon Studies, vol. 26, 2017, 230. Christopher Cannon Jones

"I found this book to be rigorous in its scholarship and, in agreeance with Richard Bushman, found MacKay's findings and arguments plausible and persuasive." Mormon Historical Studies Vol. 17, No. 1 & 2, 367. Daniel H. Olsen, Associate Professor, Department of Geography, BYU.

From Darkness Unto Light: Joseph Smith's Translation and Publication of the Book of Mormon

"They have tracked down scraps of information in archives from New York to Utah, from obscure nineteenth-century publications as far-flung as the Ohio Observer and the Milwaukee Sentinel, and even from much better-known sources like Joseph Smith revelations, which they have with a keen eye for detail and often-missed nuance." Journal of Book of Mormon Studies, Vol. 26, 2017, 218. Matthew Bowman, associate professor of history at Henderson State University and author of The Mormon People.

From Darkness Unto Light: Joseph Smith's Translation and Publication of the Book of Mormon

Read reviews: Review in the Journal of the Early Republic​

Early Mormonism, theology, religious studies, and the history of science and medicine.